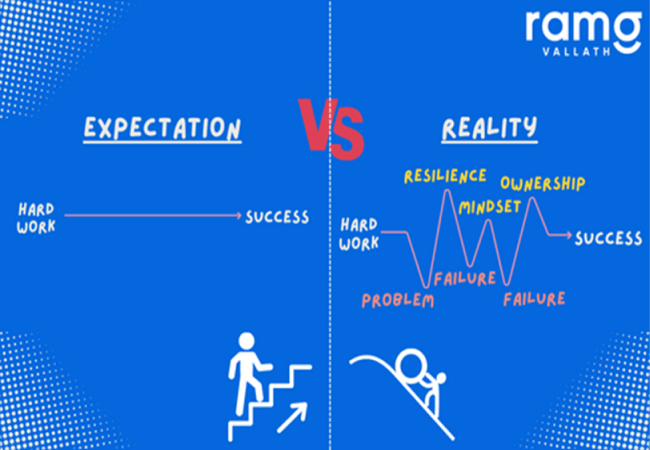 The Road To Success

“Expecting life not to be unfair, just because you are fair to everyone is like expecting a lion not to eat you just because you don’t eat lions”. This social media post I saw describes my life perfectly.

When I started my professional life as a young Management Trainee in 1992, I had no idea just how many challenges, setbacks, and failures life would throw at me.

If I did, I would have been indignant — how can life be so bloody unfair???

Today, when I look back at my life, the one thing I realise is this — hard work is only the bare minimum that is required to find success in life.

A few of the other qualities that are essential are

1.    Growth Mindset – the belief that any ability can be learned. That one can learn anything and from anyone. That failures are not a reflection on you, but only your lack of preparation

2.    Resilience — the ability to quickly accept reality and then to try and maximise the reality instead of expending energy on resenting reality

3.    Ownership — the belief that ultimately, you need to take complete ownership for your own life. And that whatever action that is needed to be done to make your life a success needs to be done by you or through your influence

4.    Social consciousness — the understanding that we are all interconnected and that the only way to success is through giving and taking help from so many people.

Did I have all these qualities in abundance when I started my professional life? Nowhere near as much as I have now. After all, life is the best teacher. All you need is the mindset to absorb the lessons life dishes out— in plenty.

From Malayalis to Martians

This ability is what has helped me get invited to four consecutive sessions at JP Morgan. This time for a session to a mix of online and in-person audiences to people in 3 countries — India, the US and Philippines.

The journey started when I joined IIT – I was 16. A Malayali who had never stepped outside Kerala before, and who had never spoken a sentence in English.

It took me about 3 months to push myself out of my comfort zone and start mingling with non-Malayalis.

But then I realised how much I can learn from others and how similar we all are. (of course, at that age, one of the key aspect to learn is the way you give ‘gaalis’ (swear words) in all the different languages and what exact intonation to use when delivering it! I did that very well, I can tell you!!)

The next step was XLRI. Coming from a predominantly South India background at IIT M, the sudden exposure to a much more cosmopolitan crowd at XLRI really helped me understand the culture of a far wider population.

The next big step was joining Compaq computers and a slew of MNCs after that.

All of a sudden, I was rubbing shoulders with people from across the world. By then, I was loving the experience of understanding engaging with differences.

So how did I inculcate this ability?

1.    I make it a point to understand cultural cues by listening a lot. The more closely I listened, the more I learned about their hot buttons, taboos, pop culture etc.
2.    I read a lot. And when I read, I don’t only ingest the story. I immerse in the whole cultural context.
3.    I am very careful never to make a joke of someone’s culture.
4.    I respect differences and never for a moment think that my culture is superior to theirs.

So today, this ability has helped me go beyond the boundaries of India as a speaker.

I wish Mars was full of green, four-handed Martians!! How delightful it would have been to learn their culture! And dish out a few choice ‘gaalis’ in Martian to my bosom Martian buddies, while I execute a hi-five to the four hands with my two!!

From Uncle to Appa

Diversity and Inclusion is a buzzword today in corporate life. But it should start at home. do we practice these with our parents, spouses, children, or our in-laws?

Mr. V. Ramamurti (now Appa) came into my life 28 years back. When I was courting his daughter, Jayashri Ramamurti (Jayu).

There were many reasons why Jayu and I were unsuitable in the minds of Appa and his relatives.

He was a Tamil Brahmin. I was a Malayali Menon. He was god-fearing and believed in temple visits and rituals. I was cynical about both to say the least.  He was a strict vegetarian and I would eat anything (crocodile meat being my ultimate achievement).

When Jayu first told him about me, he threatened to jump from the window (9th floor. Not ground floor, mind you!).

Finally it took a lot of back-end negotiations through the emissary of Jayu’s sister to convince him to explore the alliance. He agreed to meet me as Jayu’s friend.

My two day visit was full of cordiality, but he refused to even acknowledge our romance once. Finally, five minutes before I was to leave, I took matters into my own hands, and apologised to him for falling in love with his daughter without his consent. The master stroke worked and RamG came out with 100%.

Jayashri and I finally got married. And Uncle became Appa.

Appa moved in with us 24 years back when my daughter Ananya was born. And he stayed on. (You can read the full version in my bestseller, From Ouch to Oops)

Life required major adjustments. Initially we stopped cooking non-veg at home. I acted like a martyr who had been forced to give up his faith at gun-point.

Jayu, caught between the warring factions(the war was never expressed. Appa and I were always polite with each other), decided we could order-in non-veg. After the kids were born, even cooking of non-veg started.

Every Diwali morning, I had to get up at 5.30, have an oil bath without shampoo and wear a ‘Veshti’. We had to then visit the temple. I agreed with minor protests. After all, it is a small adjustment for me. But a big deal for Appa and hence Jayu.

Now, I realise that while I thought I was the one making the adjustments, it was much more for him (30 years older)

Having non-veg being cooked at home would have been a huge sacrifice. Having a son-in-law who wasn’t praying every day or visiting temples would have been very difficult.

But both of us realised how similar most of our values were. We chose to look at those rather than the few things we disagreed on.

Today, Appa is my biggest supporter. He goes through all my videos and blogs. Before every important talk, I bow down to him to take his blessings. If he has a problem with social media, I am his rescuer.

Each human has our distinct genetics, upbringing and experiences that make us unique. Life would be so much easier, less stressful, and filled with happiness if we accept this rather than trying to change the other person. Don’t you agree?

It isn’t always about getting ahead…

This post will resonate with every Indian. Especially people in Bangalore who have to acquire Buddha-like patience in order not to go insane with frustration on the roads of Bangalore…

Yesterday, I was going back home from my office. My driver was driving and I was in the back seat. It was peak traffic time and we were crawling.

The road had a divider. I noticed that about 100 meters ahead, there was a gap in the road and an SUV was trying to take a U turn from the other side and come to this side.

Unfortunately, no car was giving way so that the SUV could complete the U turn. As a result, it was stuck half way into the turn.

This was causing a bottle neck on both sides of the road, because with an SUV stuck perpendicularly, across the divider, half a lane was taken up on both sides. Hence the reason for the extreme slow crawl of traffic, slower than even usual Bangalore traffic.

As I came closer (must have taken a full 5 minutes to cover the 100 metres) I observed an interesting behaviour by the drivers ahead of me.

Typically, each car was keeping about 2 feet gap with the car ahead. But as they neared the ‘stuck’ car, they would close the gap to less than a foot to ensure the SUV wouldn’t nose its way in.

So even if it meant the risk of their own cars bumping into the car ahead was higher, they were all determined not to let the ‘upstart’ SUV sneak in.

My driver, Nagendra, was determined to do exactly that. I saw the distance between my car and the one ahead steadily decrease as we inched closer.

So I leaned forward and told him gently. ‘Nagendra, let the SUV complete the turn. Give space’. Nagendra must have been crestfallen. But he did my bidding.

The SUV driver was also amazed at this act of kindness. Once the fact that Nagendra was giving way struck him, he smiled and nodded at Nagendra and quickly completed the turn.

The cars behind me did what was expected. They viciously honked the horns. In the language of cars, these honks must have been the worst of ‘gaalis’.

The obstructing SUV having moved on, both sides of the road picked up speed. One civil behaviour from us, prompted by kindness and empathy, had eased the way for hundreds of cars to come.

All it took was for one car (mine) to sacrifice about 20 seconds — one car-length worth of time.

This sacrifice saved hundreds of cars substantial time by moving up their speeds. It saved the SUV driver at least 10 minutes.

Compassion and empathy are at the root of civic sense. Teach your children empathy and compassion.

Next time you are in the same situation or at a junction where everyone is trying to shove their noses in without giving way, will you please think of this?